We had a great time at our first SMART Champions Summer Event on 14th July, which we co-hosted with the Chelsea Community Champions, and the Earl̵… more

Collage is the use of different forms to create a new whole image. Although collage has been around for centuries, Georges Braque is credited as the first modern artist to incorporate papiers collés into his paintings. Papiers collés is term used to describe a particular type of collage where paper is adhered to a flat mount.

You will need: scissors glue and paper and newspapers and magazines
visit this site to get a randomly generated phrase and write it down. Create a collage book of at least four individual collage images that are based on the theme of your chosen phrase.

Sergei Eisenstein pioneered a number of editing techniques in his films that are taken for granted in modern film. His techniques, sometimes called intellectual montage involved putting clips together in a sequence to not only tell a story but to convey messages through juxtaposition. One such montage involved shots of a lion placed sequentially to convey the notion of it rising from slumber. Eisenstein wanted the audience to liken this lion to the rebelling populace in the subsequent scenes.

You will need: scissors glue and paper and newspapers and magazines
Produce a collage that tells a story through the items you choose. Make the story you tell different from the one intended in the individual images. 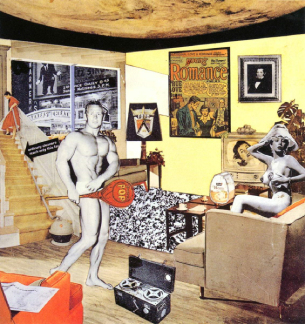 Richard Hamilton’s collage of 1955,”Just what is it that makes today’s homes so different so appealing”, features collaged items from contemporary consumer society and is one of the earliest works of the Pop Art movement. Pop culture and it’s influence on society became the primary concern for a number artists including Roy Lichtenstein, Andy Warhol and Peter Blake. Appropriation of the ephemeral images generated by the mass media was important. Some, like Warhol made copies of these images, others like Hamilton used collage directly. A full list of the sources of the collage elements can be found here.

You will need: scissors glue and paper and newspapers and magazines
Produce a pop art room collage. Collect household items you see in any printed matter (catalogues are good for this) and build a collaged room.