JMW Turner captured the sea in all it’s facets. The painting above famously had the inscription on the back: “I did not paint it to be understood, but I wished to show what such a scene was like; I got the sailors to lash me to the mast to observe it; I was lashed for four hours, and I did not expect to escape, but I felt bound to record it if I did.” The effect is one of a kind. The critic John Ruskin said it was “one of the very grandest statements of sea-motion, mist and light, that has ever been put on canvas”

You will need: paper, pens, pencils, paints if you have them.
Draw a sea scape from memory. It could be a beach scene from a summer holiday or a trip on a ferry. Try to to capture the waves of the sea and the reflection of the sky on the water.

The sea has always been a source of wonder and mystery for people, the creatures people imagined were out at sea reflect this fact. This detail from a map of the coast of Norway from 1539 illustrate the point. 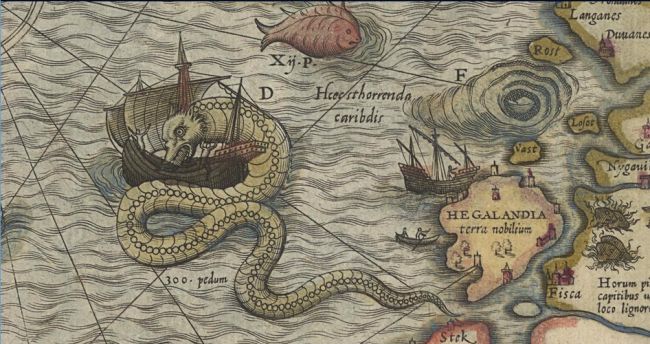 You will need: paper, pens (ideal) but a 2B pencils (optional)
Draw an illustrated map featuring a coastline. Match the style of an engraving if you can. You might find a pen is better for this. Many maps of this kind were tinted with light colours to add some definition between areas.

You will need: paper, pens, pencils.
Pick a poem about the sea and read it carefully. A good starting point is this site. Draw a response to the poem you have just read. Pick some of the imagery that the words evoke as the source of your drawing. Focus on creating a single composition that illustrates the poem as fully as you can.

People’s relationship to the sea as a means of sustenance is visible in the responses that people produce who live near the sea. What is interesting is woodblock artists like Hokusai have depicted the sea using different patterns whilst maintaining the realistic shape of the waves. 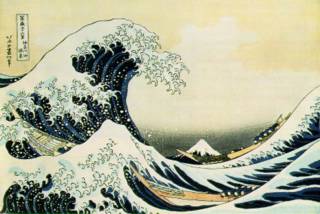 You will need: paper, pens, pencils a still life.
Draw a still life based on the objects you have to hand. Try drawing the still life in the style of a woodblock print. Like the ones featured in the images above. The will mean focussing on strong black outlines and flat areas of colour.